Burberry and the ‘Bozo Filter’.

A quick scan of their Facebook updates shows that their recent updates are overrun with comments from anti-fur campaigners. The “Save Kimi” campaign aims to raise awareness around the use of animal sourced fur used in Burberry’s line of products.

While reports have stated that a petition has received more than 125,000 signatories already, it’s the social media activity of the campaigners and their followers that is causing Burberry massive disruption.

Burberry are regarded by many in the digital realm as the ‘Gold Standard’ of how luxury brands should act online. Their transformation from me-too to global icon is in no small part due to the work of Angela Ahrendts and her focus on digital as a means to create that transformation.

Burberry changed the game for luxury fashion brands, who previously had seen digital as too childish and mass market for their marketing aims.  Burberry brought bloggers to runway shows and live-streamed those same fashion launches at a time when its competitor brands held the leash tightly. While Burberry aimed to reveal its collections live over an iPhone app, the rest of the market was trying to make sure the front row was filled with Fashion magazine editors, and embargoed the show details to build a sense of exclusivity.

Burberry’s gamble paid off. Now everyone with an iPhone or a PC was in the front row. And instead of relying only on Anna Wintour to create hype, Burberry was able to call on millions of Facebook, Twitter and Instagram fans to repeat the message and create the hype for them.

Burberry’s comment thread for every Facebook post now is little more than comments and links to the Save Kimi, anti-fur campaign. The moment they post, the comment thread fills up with these messages. They’ve effectively lost the very thing they have thrived on – engagement with their consumers. Their Facebook is now nothing more than a battleground for a cause.

So what’s a brand to do?

As mentioned, Burberry are considered by many people as the leaders in luxury brand digital experience. Their team is no doubt aware of the issue.

They could delete the posts. One by one as they come in, manually clicking the delete button. It would be a 24×7 job, but for a brand Burberry’s size, not a problem.  But it would perhaps lead to further backlash.  Deleting posts could give the campaigners further ammunition, and lead to another wave of press as the leaders of the campaign make claims about freedom of speech.*

Another option is to ignore it, hoping that by inaction you don’t add fuel to fire and the campaign runs its course – dying a natural death (no pun intended).  In the meantime they lose control of the platform and would have to shelve any big marketing plans to ensure a Burberry marketing campaign isn’t giving further oxygen to the anti-fur campaign.

But there is another option. An option some people call “The Bozo Filter”.

In Facebook you have a settings panel for every brand page you manage. One of the settings available is titled “Page Moderation”. 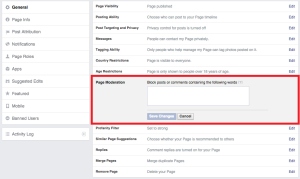 This setting allows an administrator to automatically hide any comment which includes any of the words you specify in your list.

Note – hide. Not delete. Hiding a comment means the person who made the comment, and their friends, can still see the comment – but no one else can.  This is the Bozo Filter. It is designed to make those annoying people who post stupid, troll-like comments feel like they’ve had their say – while at the same time keeping them from destroying your community.

So why haven’t Burberry added “Kimi”, “Fur” and “Killed” to their Page Moderation terms? I wish I knew. Maybe they will when someone points out how easy it is, and how effective.

* A note on free speech – anyone who thinks a brand should be forced to endure free speech when that speech is anti the brand, and that speech occurs on the brand’s owned channels is fooling themselves. If you want to abuse me behind my back – fine, I can’t stop you. But if you print a t-shirt abusing me and then ask me to put it on and wear it out to drinks on a Friday night, you’ve got no chance.

Burberry’s reaction to this campaign has taken a new twist – they’ve gone quiet.

In the past two weeks they’ve only posted two updates.

Compared to their previous activity, roughly six posts per week on average, this is certainly a change – and one that is almost certainly a response to the #SaveKimi campaign.

It’s resulted in a massive, no – HUGE, drop in engagement. How do we know?

You are using Facebook’s “Pages to Watch” feature to monitor yourself, your competitors and brands you aspire to… right?

Error: Twitter did not respond. Please wait a few minutes and refresh this page.